SEOUL, Aug. 30 (Yonhap) -- South Korea has crashed out of the final qualifying event for the 2022 Winter Olympic men's hockey tournament.

Coached by the former National Hockey League (NHL) defenseman Jim Paek, South Korea lost all three games in the last-chance Olympic qualification event in Oslo over the past week.

The last blow came on Sunday in the form of a 4-1 loss to Slovenia at Jordal Amfi area in the Norwegian capital. 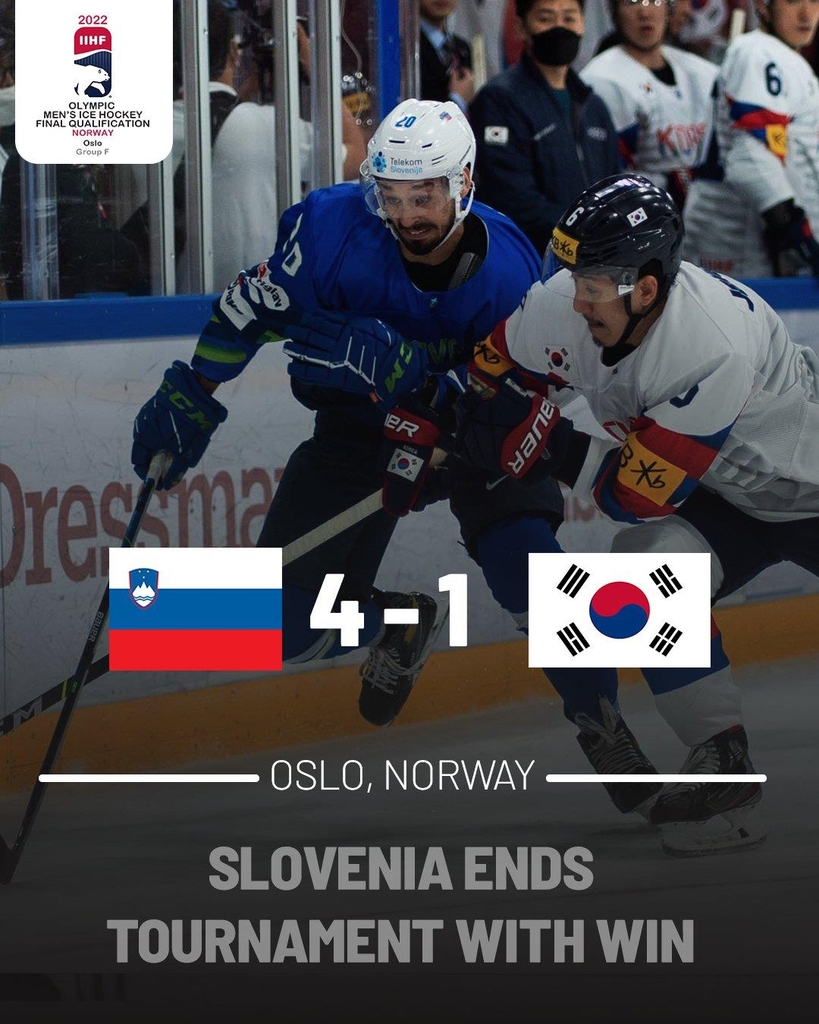 South Korea couldn't make Ahn Jin-hui's first-period goal stand, as Slovenia, led by the Los Angeles Kings star Anze Kopitar, stormed back with three straight goals in the middle frame. Kopitar had a goal and three assists in the victory, which was capped off with Kopitar's empty netter with 15 seconds remaining.

South Korea, at world No. 19, was paired in Group F of the final qualifying tournament with Slovenia (20th in the world rankings), Denmark (12th) and Norway (11th). With only the group winner competing at the 2022 Beijing Winter Olympics, South Korea ended up finishing in last place.

South Korea fell to Norway 4-1 on Thursday and it was followed by an 11-1 thrashing at the hands of Denmark on Friday.

Paek, a two-time Stanley Cup champion with the Pittsburgh Penguins, was trying to have South Korea qualify for a Winter Olympics for the first time.

South Korea made its Olympic men's hockey debut in 2018 as the host country. The team lost all four of its games, while scoring three goals and allowing 19.

The 2018 Olympic squad featured six Canadian-born and one U.S.-born player who had naturalized as South Korean citizens. Of the seven, though, only goalie Matt Dalton, a native of Clinton, Ontario, remains on the national team.

In the midst of South Korea's transition, the hockey world was rocked by the COVID-19 pandemic, which wiped out virtually all international tournaments. While the NHL and other leagues resumed play in the summer of 2020, the Asian league featuring clubs from South Korea, Japan and Russia canceled its 2020-2021 season. It kept South Korean national team players from getting into competitive action and staying sharp before Olympic qualifiers.

The start of the 2021-2022 season, initially set for September, has been pushed to at least December.