A group of 390 Afghan refugees who arrived in South Korea Thursday were admitted the following day to the National Human Resources Development Institute, designated as their temporary shelter, in Jincheon, a North Chungcheong Province county located 91 kilometers southeast of Seoul. 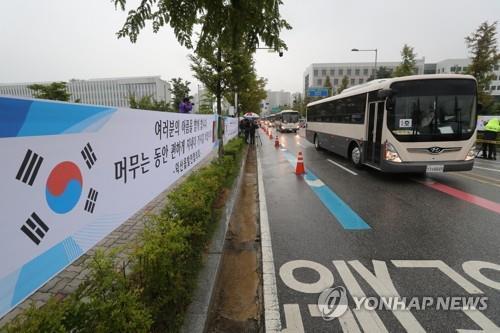 As buses carrying the Afghans arrived in Jincheon, an unprecedented number of online shoppers from across the country began to click on Jincheon Mall, a non-profit online shopping mall operated by the county office, in an apparent show of praise for Jincheon residents and their embracing of war refugees.

Jincheon Mall, also known as JC Mall, eventually became "paralyzed" because of the large number of orders, according to county officials on Monday.

The shopping mall said in a notice posted Sunday that it had received about 1,500 orders since Friday, more than 20 times higher than the usual weekend orders.

"In order to avoid delays in delivery as much as possible, we have inevitably decided to temporarily stop receiving orders," the notice said.

"Most of Jincheon Mall's products are produced from time to time rather than being sold with a large amount of inventory prepared. Orders have already exceeded our daily production capacity," it explained.

An official from the county office said Jincheon Mall has also been flooded with thank you messages from a large number of people, in addition to the soaring orders for its agricultural products.

In the messages, most South Koreans said they felt grateful to Jincheon residents for accepting and treating Afghan refugees kindly, he said.

"Usually, Jincheon Mall received 30 to 35 orders a day. Following news of the Afghan refugees' arrival in Jincheon, its orders surged beyond capacity," said the official.

Orders for Jincheon Mall similarly snowballed in January last year, when the county and its residents agreed to accommodate nearly 200 South Korean evacuees from Wuhan, China, in the wake of the coronavirus outbreak.

According to the Ministry of Justice, the Afghan evacuees will remain in quarantine at the Jincheon facility for two weeks and stay there for six more weeks to receive various educational classes on how to live in South Korea.