SEOUL, Aug. 30 (Yonhap) -- The United States will not take part in the upcoming combined naval exercise between the South Korean Navy and a British aircraft carrier strike group, the defense ministry in Seoul said Monday.

The joint training for humanitarian and disaster relief missions is scheduled to be held in waters off the Korean Peninsula on Tuesday, with the aircraft carrier HMS Queen Elizabeth, which is visiting South Korea as part of its seven-month world tour, taking part.

Some local media reported that the U.S. will also join them for the joint exercise, but the defense ministry said the planned exercise will be the bilateral one.

"The strike group involves assets of other countries, including the U.S., but they will not participate in the Korea-Britain combined exercise," defense ministry spokesperson Boo Seung-chan told a regular briefing.

The 6,400-ton aircraft carrier is escorted by several British navy vessels, as well as a Dutch frigate and the USS The Sullivans, a U.S. guided-missile destroyer.

It initially planned a port call in the southeastern city of Busan, but the plan was called off due to COVID-19. Instead, the two nations decided to conduct scaled-back exchange activities from Monday through Wednesday, according to the ministry. 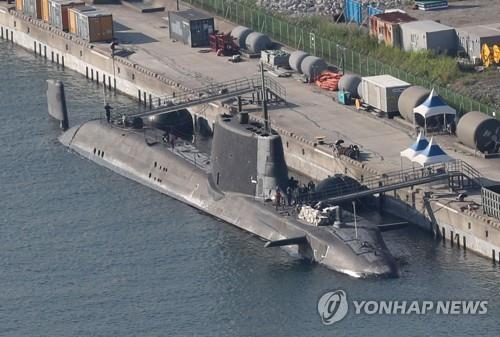