SEOUL, Aug. 30 (Yonhap) -- The number of newly established companies in South Korea declined nearly 10 percent in the first half of the year due to a one-off factor, government data showed Monday.

A total of 730,260 new businesses were set up in the January-June period, down 9.8 percent from a year earlier, according to the data from the Ministry of Small and Medium-sized Enterprises (SMEs) and Startups.

The ministry attributed the drop to a base effect. A year earlier, there was a sharp increase in the number of real estate firms in the wake of a requirement for the registration of rental business operators.

The number of real estate companies tumbled 45.1 percent on-year in the first half due to the base effect.

Excluding the property sector, the number of newly opened companies increased 10.2 percent from a year earlier.

The number of newly established retailers and wholesalers jumped 18.3 percent on-year in the six-month period, with that of restaurants and other hospitality firms rising 1.8 percent, according to the data. 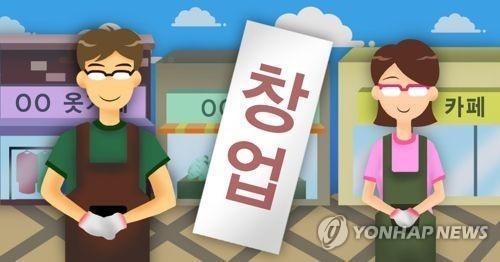