SEOUL, Aug. 30 (Yonhap) -- K-pop boy band Tomorrow X Together (TXT) has made it back to the top 10 of Billboard's main albums chart this week with a new repackaged album of their second studio album.

"Tomorrow X Together's 'The Chaos Chapter: Freeze' re-enters the chart at No. 8," Billboard said Sunday (U.S. time) on its website.

Released in May, the album peaked at No. 5 in June and has remained on the chart for nine straight weeks. The five-member band was the sixth K-pop act that has made it into the top five spots of the main albums chart, following BTS, BLACKPINK, Super M, NCT 127 and Monsta X.

The latest re-entry came as TXT dropped a repackaged album "The Chaos Chapter: Fight or Escape," that includes three new tracks, on Aug. 20.

The Billboard 200 chart ranks the most popular albums of the week in the United States measured by equivalent album units, comprised of physical album sales and other digital sales records. 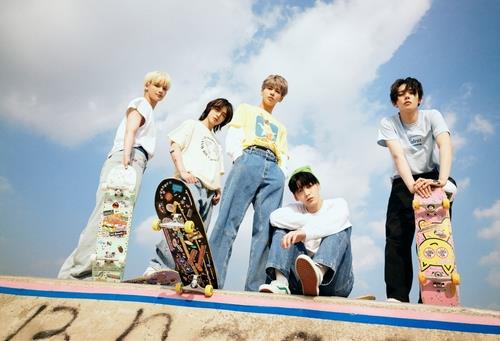