Trading volume was moderate at about 595 million shares worth some 11.6 trillion won (US$9.9 billion), with gainers outnumbering losers 561 to 285. 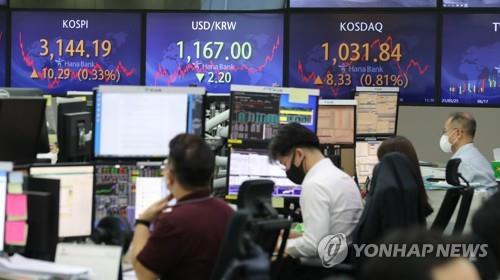 The KOSPI performed strong, following Fed Chairman Jerome Powell's Friday address that the Fed could begin tapering its asset purchases this year, but that the move should be made separately from raising interest rates.

The key stock index trimmed part of its earlier gains as investors took to lock in profit from the two-day gains.

The local currency closed at 1,167 won against the U.S. dollar, up 2.2 won from the previous session's close.

Bond prices, which move inversely to yields, closed higher. The yield on three-year Treasurys lost 1 basis point to 1.398 percent, and the return on the benchmark five-year government bond fell 1.5 basis points to 1.652 percent.