SEOUL, Aug. 30 (Yonhap) -- Rival parties on Monday failed to agree on a controversial media bill and decided to meet again the next day to discuss its fate.

The bill is designed to impose a fivefold increase in penalties on media outlets that make false or fabricated news reports, prompting heated criticism from opposition parties and media industry groups that it is intended to gag critical media in the run-up to next year's presidential election.

At issue was the DP's drive to pass the contentious bill, based on its absolute parliamentary majority, at a plenary voting session scheduled for the day.

On the back of fierce backlash from the local media industry against the bill, however, the PPP had threatened to mount a filibuster to block its passage.

The breakdown of the bipartisan talks led to the cancellation of a plenary session slated for the day, where a string of key bills, including that on blocking Google's upcoming policy to enforce the exclusive use of its in-app payment system, were to be put to a vote.

The floor leaders said they will meet again on Tuesday morning to continue their negotiations. 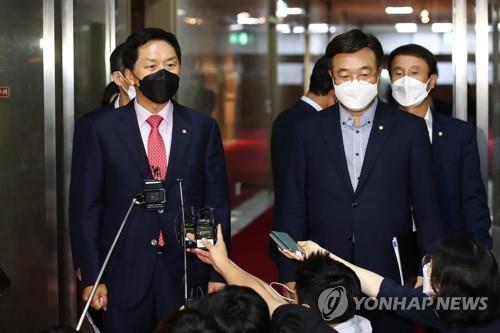