SEOUL, Aug. 31 (Yonhap) -- South Korea and the United States launched a joint project Tuesday to recover the remains of troops killed during the 1950-53 Korean War at a former battle site near the inter-Korean border, the defense ministry said.

Around 60 South Korean military personnel and 10 from the U.S.' Defense POW/MIA Accounting Agency (DPAA) began the joint excavation work on Mount Baekseok in the northeastern county of Yanggu, which will continue through Sept. 16, according to the ministry.

As one of the key strategic points in the eastern region during the war, the area was where a fierce weekslong battle took place in 1951 at the height of the Korean War. So far, more than 580 sets of war remains have been discovered from the site, and 18 have been identified, including two American soldiers.

The retrieved remains will go through a process for identification, the ministry added.

"This joint operation will not only strengthen the relationship between our two organizations but also help us to keep our promise to our fallen heroes: To bring them home," Sgt. Nathaniel Doan from the DPAA said.

The Korean War broke out in June 1950, when North Korea, backed by the Soviet Union, invaded the South. The U.S. and 21 other nations fought alongside the South under the U.N. flag, and around 289,000 South Korean and international soldiers were killed, and about 28,445 others still remain missing.

South Korea and the U.S. have been working closely to repatriate the remains of the victims since 2000, according to the ministry. 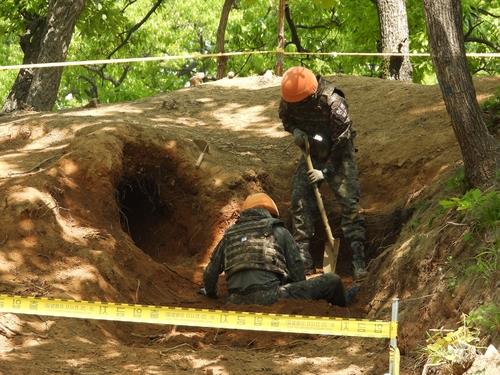