SEOUL, Aug. 31 (Yonhap) -- British Royal Navy Commodore Steve Moorhouse, commander of an aircraft carrier strike group on a seven-month world tour, has called for strengthening cooperation with South Korea as part of its efforts to boost his country's involvement in the Indo-Pacific region.

Moorhouse made the remark as the aircraft carrier HMS Queen Elizabeth and its fleet was in waters off the Korean Peninsula on Tuesday for a joint training with South Korea for humanitarian and disaster relief missions.

"The United Kingdom, like the Republic of Korea, is an outward-looking trading nation committed to contributing to maritime security, which underpins global prosperity," he said in a video posted on Twitter on Monday.

"By sailing here, we make clear our determination to work with like-minded nations in support of an open and transparent system of international rules," he said. "Our aim is to strengthen the ties between our two countries and to pave the way for closer cooperation in the future."

During the joint training, the South Korean Navy was expected to dispatch a 14,000-ton large transport ship, an Aegis destroyer and a submarine, among other assets.

The 64,000-ton British aircraft carrier had planned a port call in the southeastern city of Busan, but the plan was called off due to the COVID-19 situation. The two sides agreed instead to conduct scaled-back exchange activities from Monday to Wednesday. 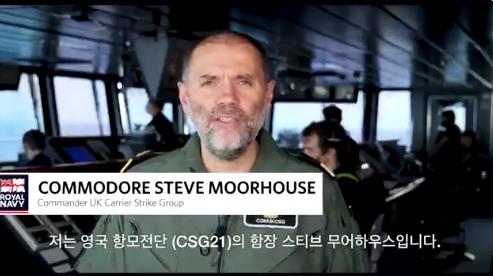