SEOUL. Aug. 31 (Yonhap) -- A court issued an arrest warrant Tuesday for a man who confessed earlier this week to killing two women, one before cutting off his ankle monitor and the other one after.

The Seoul Dongbu District Court issued the warrant, saying the man, a 56-year-old surnamed Kang, is a flight risk. Police sought a formal warrant against him late Monday afternoon on suspicion of murder and violation of the law on electronic surveillance devices.

Kang was arrested without a warrant Sunday when he turned himself in to Songpa Police Station in southeastern Seoul, saying he killed two women -- one before he cut off his monitoring ankle bracelet and ran away Friday, and the other while he was on the run.

According to the man's account, the police searched and found one victim's body at his house and the other in his car. The two women, in their 40s and 50s, respectively, are said to have known the man. Autopsy results showed they are presumed to have been strangled to death. 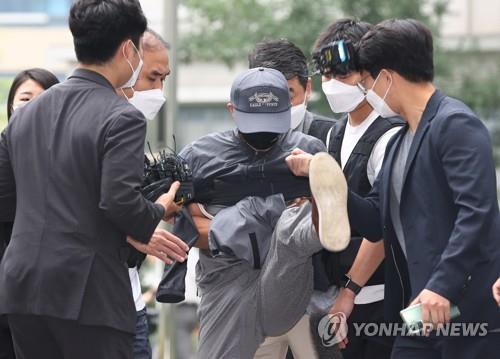 Appearing outside the police station and the courthouse before attending his arrest warrant hearing Tuesday morning, he repeatedly and angrily shouted at reporters who asked him about the details of the crimes and his motives.

"Reporters do false reporting! People should know the truth," he shouted at one point.

After arriving at the court, he kicked a microphone held by a reporter who asked, "Why did you kill the victims?" and used swear words and yelled, "Do your job properly," before being escorted to the inside of the courthouse.

His erratic behaviors and venting of anger continued after the hearing ended at around 11:20 a.m. Asked if he had any words for his victims, Kang swore and bawled, "I regret I couldn't kill more!" 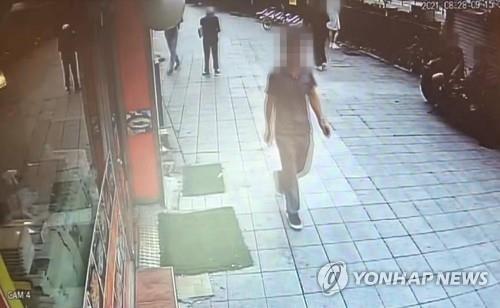 Following the incident, the Ministry of Justice said it will make the device harder to cut off, enhance cooperation with police by swiftly sharing information on criminals wearing such devices and introduce an improved system to gauge the risk of recidivism.