On Friday, the Korean Health and Medical Workers' Union (KHMU) voted to go on strike starting Sept. 2 to demand better working conditions and the expansion of public health infrastructure amid concerns of a workforce shortage at hospitals as the country battles its worst wave of the COVID-19 pandemic.

The minister urged against the strike, warning of the potential harm it may have on the broader public.

"Now is the time to focus on responding to the fourth wave of the pandemic," Kwon said in a press briefing. "In this grave situation, (we) request collective movements, such as strikes, not be conducted, and the current situation be resolved through talks and consultations."

Kwon said the government has conducted 12 rounds of negotiations with the union without reaching an agreement. 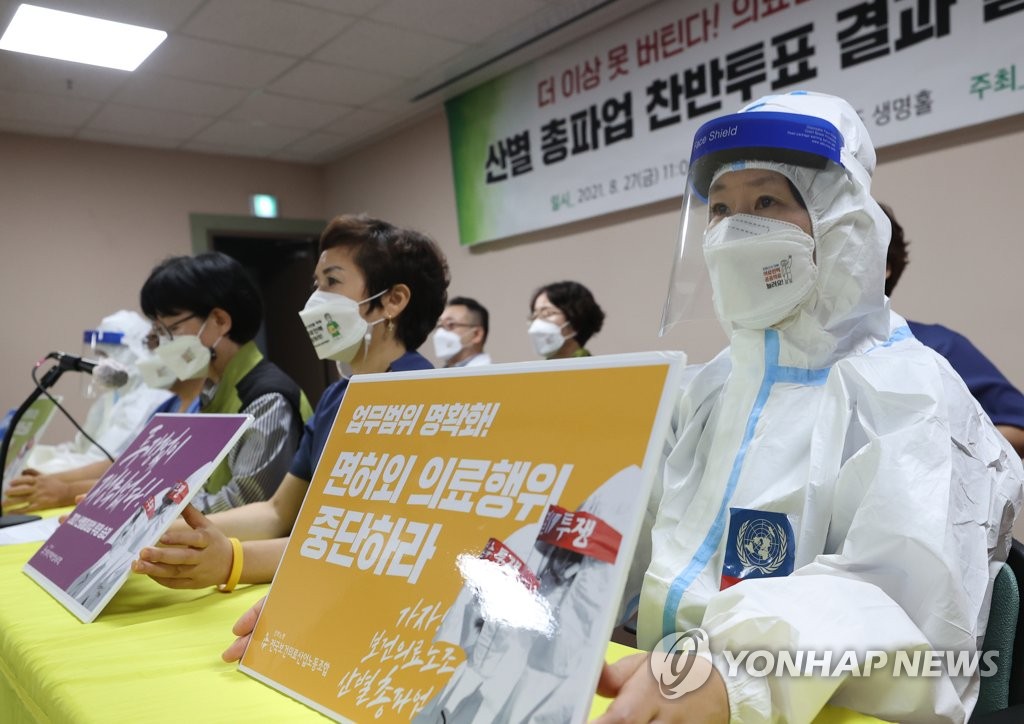 The KHMU represents a total of 56,091 nurses, medical engineers, nursing aides and other health workers that work at hospitals and medical clinics nationwide.

The government expects around 30 percent of the union members to take part in the strike, excluding the essential workforce in emergency rooms, intensive care units, delivery rooms and others.

The union has demanded the government improve the working conditions of health care workers and increase the number of public hospitals and their medical personnel, but it has so far failed to narrow differences with health authorities.

The union's move comes as a growing number of nurses in public health clinics have quit or taken temporary leave since last year due to cumulative fatigue and mental stress amid the prolonged pandemic.

A growing number of front-line nurses and health care workers are suffering from burnout due to a chronic workforce shortage and insufficient benefits despite tight schedules.

On Tuesday, South Korea added 1,372 more COVID-19 cases, raising the total caseload to 251,421, according to the Korea Disease Control and Prevention Agency (KDCA).

Despite implementing the toughest restrictions in the greater Seoul area since early July, the fourth wave has shown little signs of slowing down amid the spread of the high contagious delta variant.