SEOUL, Aug. 31 (Yonhap) -- Rival parties on Tuesday agreed to push back their plan to review a controversial media bill at the National Assembly by about a month to take more time to discuss it in the face of strong resistance from media industry groups and opposition lawmakers, party officials said.

The bill, championed by the DP, is designed to impose a fivefold increase in penalties on media outlets that make false or fabricated news reports, prompting heated criticism from opposition parties and media industry groups that it is intended to gag critical media in the runup to next year's presidential election.

The DP initially planned to push the bill, based on its absolute parliamentary majority, through a plenary voting session this month but shied away from taking action out of concerns it could stir public backlash ahead of the election and the PPP's threat to block its passage via a filibuster.

Under the agreement, the parties will establish an eight-person consultative group composed of lawmakers and experts of journalism to review the bill before it is put to a vote, according to the officials. The last-minute decision was endorsed by members of both the parties.

The rival parties also agreed to hold a plenary session later in the day to process other key pending bills, including those on blocking Google's upcoming policy to enforce the exclusive use of its in-app payment system and mandating the installation of surveillance cameras inside hospital rooms.

"It is very meaningful that the two parties have reached an agreement on opening up the path to rescuing people who suffer from damage stemming from fake news," the DP floor leader said, vowing smooth negotiations on the bill.

The PPP counterpart stressed that "the freedom of expression and the people's rights to know should be guaranteed under any circumstances" when dealing with the bill. 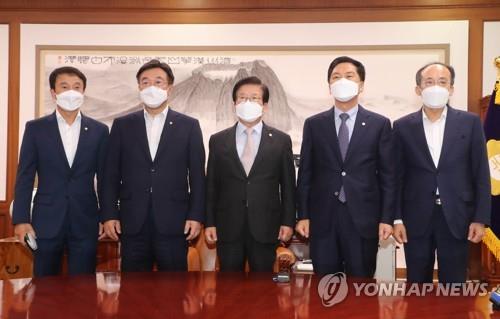