Investigators from the Seoul Metropolitan Police Agency searched some City Hall offices, including the city planning and transport policy bureaus, to seize documents related to Oh's remarks on a scandal-plagued development project called Pi-City in southern Seoul, according to police officials. 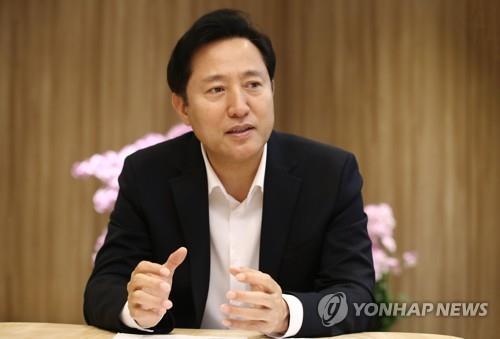 Oh affiliated with the main opposition People Power Party won a landslide victory against the ruling Democratic Party's candidate in the April 7 mayoral by-election. Oh had previously served as the mayor of Seoul from 2006 to 2011.

The Seoul metropolitan government issued a statement criticizing the police raid as an "excessive and politically oriented" investigation into a mayor from the opposition party.

"Oh's remarks (on the Pi-City project) merely came from his memories of the past," the statement said. "(Police) could have confirmed the truth without any raid by making inquiries about the relevant facts," it said. "But they have abruptly raided and searched City Hall as if there had been a huge criminal act by the mayor."