SEOUL, Aug. 31 (Yonhap) -- The National Assembly on Tuesday approved a contentious bill requiring surveillance cameras in hospital operating rooms in a bid to step up protection for patients against medical negligence or malpractice.

The bill was passed about six years after related parliamentary discussions on its necessity first emerged, in the face of stiff objection from doctors' groups.

The revision to the Medical Service Act mandates installing closed-circuit TV cameras in hospital operation rooms and recording medical procedures in video images when requested by a patient.

The video images should be kept for at least 30 days for future reference in the event of legal disputes.

The bill, however, exceptionally gives doctors a right to evade the mandate if they have "valid reasons," such as having to conduct an emergency operation. It also gives a two-year grace period before officially going into force after its promulgation.

Proposed by a group of ruling party lawmakers, the revision aims to bolster protection for patients against medical negligence and malpractice, such as "ghost operations," conducted by unqualified doctors behind the scenes or sexual crimes committed on patients under anesthesia.

Local medical groups, however, resisted the legislation, saying it will create distrust between doctors and patients, eventually debasing the quality of medical services. 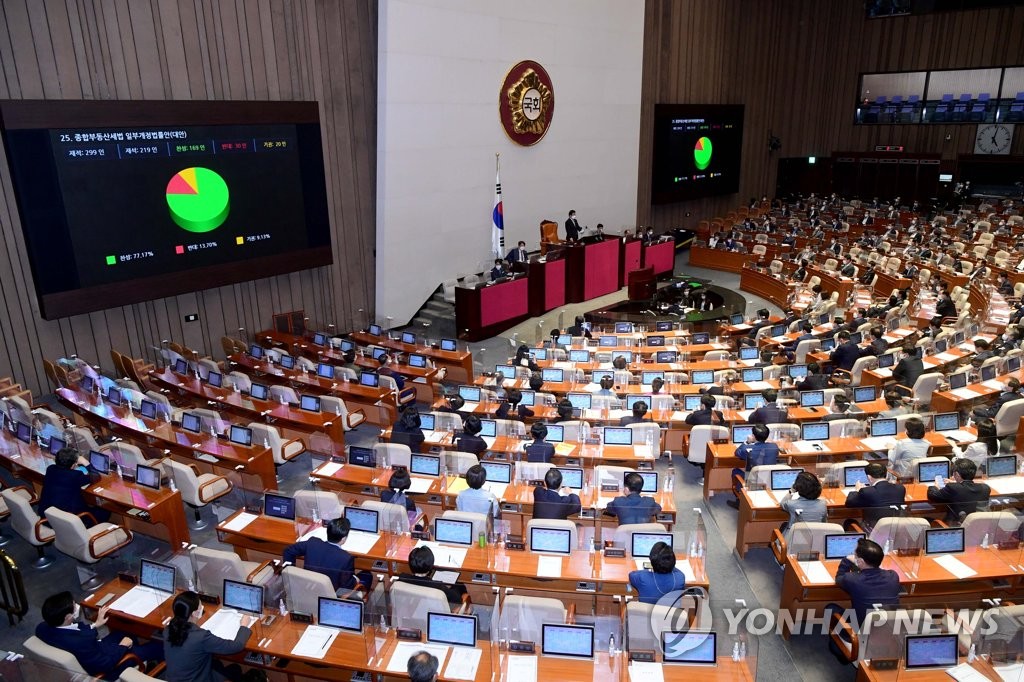 The revision would prohibit app market giants like Google and Apple Inc. from forcing mobile content providers, based on their dominant market status, to exclusively use designated billing methods that impose up to a 30 percent commission for in-app transactions of digital content, such as music, web-based comics and stories, as well as mobile games.

South Korea is the first country to introduce, through legislation, such curbs on global tech giants' in-app billing policies, which have been increasingly under scrutiny around the world.

The bill was proposed after Google's decision, announced a year earlier, to enforce a new policy requiring developers of Android software-based applications on the Google Play Store to exclusively use its own in-app billing system aroused fierce protests from the IT industry and consumer groups here.

Lawmakers also approved a bill to revise the Military Court Act during the session.

The revision will subject military service personnel involved in sexual violence or death cases to trial at civil courts, not military courts, and abolish the military appellate court in order to send all appeal cases involving the military to civil courts.

The revision, proposed following a recent series of sexual violence cases inside barracks, aims to step up legal protection for victims in military-related cases.

The plenary session on Tuesday was convened following a last-minute agreement between the two mainstream rival parties over a highly contested media reform bill.

The ruling Democratic Party, controlling an absolute parliamentary majority, planned to pass the so-called media arbitration bill through a plenary session this month. The party, however, shied away from taking action amid fierce opposition protests, and agreed with the main opposition People Power Party to push back the plan until next plenary session in late September to take more time to discuss the sensitive bill.

The bill was designed to impose a fivefold increase in penalties on media outlets that make false or fabricated news reports, prompting heated criticism from the media industry that it is intended to gag critical media in the runup to next year's presidential election.