During the talks held in Muscat on Wednesday, the Omani minister voiced hope for expanding cooperation into advanced weapons systems from the fields of conventional weapons and vowed to push for sending a delegation to South Korea, according to the ministry.

The two sides then agreed to work closely to enhance their exchanges and cooperation in defense and more diverse related sectors, it added.

The two ministers also exchanged opinions on regional security circumstances. The Omani minister said his country supports the Seoul government's peace efforts involving North Korea, while asking for Seoul to play a bigger role in peace and stability in the Middle East, according to the ministry.

Oman was the last leg of Suh's two-nation trip that also took him to Egypt earlier this week.

Later in the day, Suh visited the Cheonghae unit, which made a call at a Muscat port, to check its implementation of antivirus guidelines and meet with the sailors, according to the ministry.

The unit dispatched to the coast of Africa reported a massive COVID-19 outbreak in July. After all of the sailors were immediately airlifted home, a new group has been conducting their anti-piracy missions. 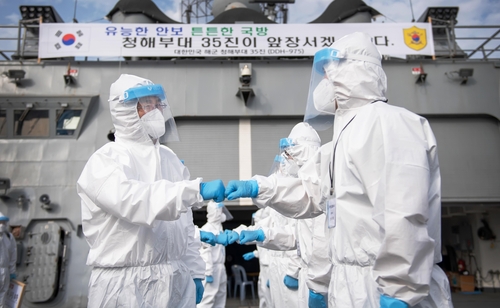