SEOUL, Sept. 2 (Yonhap) -- South Korea and China held a ceremony Thursday to repatriate 109 sets of the remains of Chinese troops killed during the 1950-53 Korean War, the defense ministry said.

The eighth such repatriation ceremony took place at Incheon International Airport, west of Seoul, a day after the two countries casketed the remains at a temporary storage facility in Incheon.

The remains were excavated from former battle sites between 2019 and 2020, including the Arrowhead Ridge inside the Demilitarized Zone separating the two Koreas, according to the ministry.

Since 2014, when the two countries agreed on the return of the Chinese troop remains, Seoul has returned 825 sets of remains of Chinese fighters, including the latest 109 sets.

"Despite the pandemic, South Korea and China decided to hold the ceremony to send the remains to their loved ones as soon as possible," Vice Defense Minister Park Jae-min said.

He then asked for China's support and cooperation for the implementation of the joint war remains excavation work between South and North Korea. The joint project inside the DMZ was agreed upon in 2018, but Pyongyang remains unresponsive to Seoul's calls.

During the war, China fought alongside North Korea against the U.S.-backed Allied forces. Nearly 1 million Chinese soldiers are believed to have died, been wounded or remain missing, according to Seoul government data. 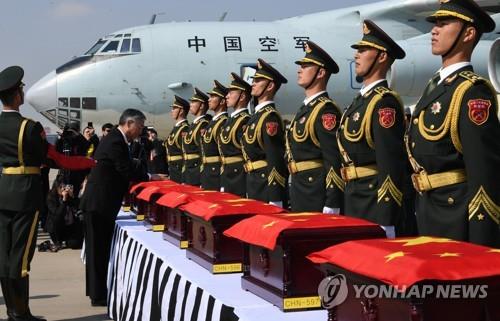