SEOUL, Sept. 2 (Yonhap) -- President Moon Jae-in has made public the names of seven newborn puppies of a dog from North Korea, saying that local government authorities in South Korea can adopt them if they want.

Moon received two Pungsan hunting dogs from North Korean leader Kim Jong-un as a "peace gift" when they had summit talks in Pyongyang in 2018. Moon has since been raising the dogs at the Cheong Wa Dae presidential compound in Seoul.

In June, one of the dogs, named Gomi, gave birth to seven puppies, sired by another Pungsan dog, Maru, which Moon had been raising since before becoming president.

Moon wrote on his social media accounts Wednesday that all seven of the puppies "have grown healthily." He unveiled their names -- "Areum," "Daun" and "Gangsan," which mean "beautiful rivers and mountains" in Korean.

The four others are named ""Bom," "Yeoreum," "Gaeul" and "Gyeoul," which stand for spring, summer, autumn and winter in Korean, respectively.

Moon added that local governments can adopt the puppies.

Gomi gave birth to six puppies in November 2018, just two months after arriving in Seoul. They were adopted by the city authorities of Seoul, Incheon, Daejeon and Gwangju months later. 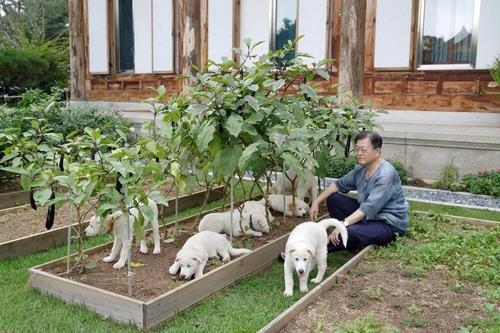