SEOUL, Sept. 2 (Yonhap) -- U.S. Forces Korea (USFK) commander Gen. Paul LaCamera has said that the latest joint exercise between South Korea and the United States served as a chance to display readiness and strengthen the bilateral alliance, but the two sides need to and can "achieve more."

The commander, who also leads the South Korea-U.S. Combined Forces Command and the United Nations Command, made the comments in a message sent to the Korea-U.S. Alliance Foundation after wrapping up the joint summertime exercise.

"My impression is the ROK military continues to display initiatives towards the pursuit of constant readiness, professionalism, endurance and focus to meet any challenge. I have been consistently impressed with the ROK-U.S. Alliance. Yet, I know we can achieve more," LaCamera said. ROK is the acronym of South Korea's official name, the Republic of Korea.

The nine-day regular exercise that ended Friday was held in a smaller scale amid the pandemic. The computer-simulated exercise did not include outdoor drills and involved a smaller number of service members than previous ones also amid peace efforts involving North Korea. 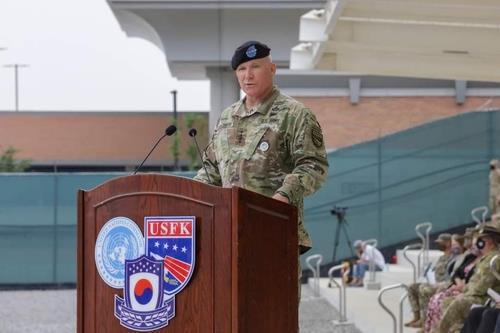 "As we continue to make concrete steps toward critical tasks, such as the bilaterally agreed upon conditions based OPCON transition, we will continue to demonstrate to our adversaries that our alliance is rock solid, ironclad, and holds the indomitable values of two unique cultures forged together in war and maintained during armistice," he added.

The two sides have been working for the transition of the wartime operational control (OPCON) of the Korean troops from Washington to Seoul, and they were supposed to conduct a Full Operational Capability (FOC) test as part of combined exercises to check if South Korea is on course to meet conditions required for retaking OPCON.

But they've not been able to carry out the FOC test since last year due to COVID-19, effectively making it impossible for the Moon Jae-in government to achieve the transition goal within its term that ends on May 2022. The transfer is not time-based but conditions-based.

North Korea warned last month of a "serious security crisis" in protest of the summertime exercise, and has not responded to the South's regular phone calls via liaison and military hotlines since Aug. 10.

Seoul's Joint Chiefs of Staff (JCS) said that North Korea has not shown unusual military activities, and the Seoul military has been closely monitoring their movement in cooperation with the U.S.

Pyongyang has long railed against the combined exercises, denouncing them as a rehearsal for invasion, though Seoul and Washington have stressed that they are regular ones that are purely defensive in nature.

"Together, we will honor our most sacred trust to prepare our combined Service Members to fight tonight and win, on the most dangerous piece of ground, the last 100 meters," LaCamera said.