SEOUL, Sept. 2 (Yonhap) -- Global shipbuilder Hyundai Heavy Industries Co. said Thursday it plans to raise up to 1.08 trillion won (US$900 million) via its initial public offering (IPO) later this month to beef up its focus on eco-friendly ship businesses.

Hyundai Heavy, owned wholly by Korea Shipbuilding & Offshore Engineering Co. (KSOE), will determine its IPO price next Monday and plans subscriptions from retail investors on Tuesday and Wednesday, it said.

The proceeds from the IPO, set for Sept. 16, will be used to develop eco-friendly ships and autonomous ships, and build smart shipyards, as well as offshore hydrogen production plants, the company said. 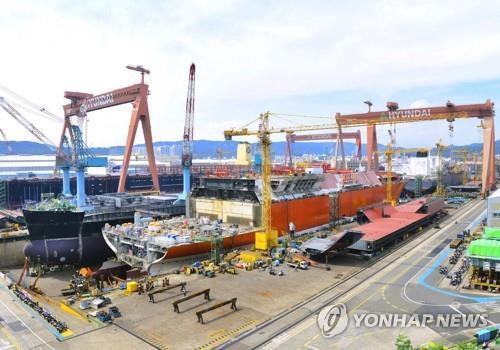 Of the proceeds, 310 billion won will be invested in the development of eco-friendly ships and autonomous ships, with 320 billion won for smart shipyards to be based on IT technologies and 130 billion won for offshore hydrogen production plants, Hyundai Heavy said.

In the first seven months of the year, Hyundai Heavy has won orders valued at $8.6 billion to build 59 ships, surpassing its $7.2 billion annual order target.

The seven-month order is the highest of the same period since 2014, the company said.