Men were paid an average 79.8 million won (US$68,800) in 2020, while their women counterparts received 51.1 million won, according to the study on 2,149 listed firms by the Ministry of Gender Equality and Family.

The gender wage gap, referring to the rate of men's average pay to that of women, reached 35.9 percent last year, far higher than 12.8 percent, the latest average of the Organization for the Economic Cooperation and Development (OECD) released by British weekly The Economist, according to the ministry.

It is the first time the South Korean government had unveiled the average earnings by gender in local listed firms. 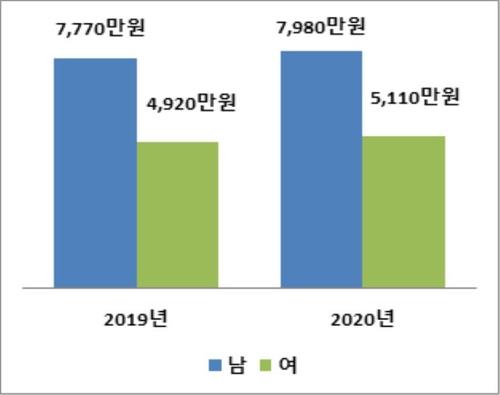 The average length of corporate service was 12.2 years for male workers and 8.2 years for female workers last year. The difference in their career length marked 32.6 percent in 2020, down 2.6 percentage points from 35.2 percent tallied the previous year.

Arts and sports companies and energy suppliers both reported the lowest gender difference in pay with 22.5 percent each, apparently due to the smaller discrepancy in the length of service between women and men, according to the ministry. 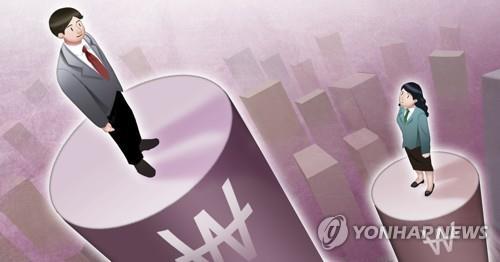 In addition, a separate survey on 369 public institutions found male workers were paid 7.76 million won on average last year, which is 27.8 percent larger than their female counterparts who earned 56.1 million won.

Men worked 13.8 years on average and women 8.8 years in public firms in 2020, with the gender gap in the length of service falling 2.1 percentage points on-year to 36.1 percent.

"We should relieve the general gender discrimination in the labor market, such as by removing entry barriers to the job market and glass ceilings, in order to narrow the wage gap between women and men," Chung Young-ai, the gender equality minister said, adding the government will beef up its efforts to do so.