SEOUL, Sept. 5 (Yonhap) -- Over 8 out of 10 South Koreans have encountered hate speech against women online, a survey showed Sunday.

According to the National Human Rights Commission of Korea (NHRCK) survey on 1,200 people aged 15 and older from May 20-25, 80.4 percent of the respondents said they have read malicious online comments targeted at women.

Hate speech against people from certain regions, feminists and the elderly came after at 76.9 percent, 76.8 percent and 72.5 percent, respectively.

Other online targets included men, sexual minorities and the disabled.

In real life, seniors were the most frequently attacked group at 69.2 percent, followed by people from certain regions at 68.9 percent and women at 67.4 percent. Over 60 percent of the respondents also said they saw hateful comments against feminists, the disabled and sexual minorities.

A majority of the respondents thought hate speech appeared to be more serious online than in real life. 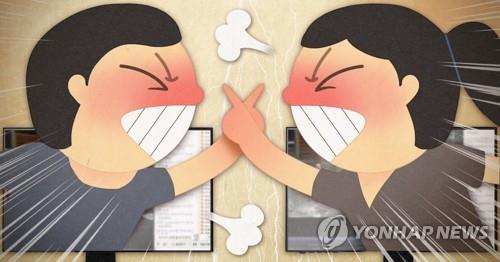 More than 70 percent of the respondents said they knew those comments were problematic but mostly ignored them or avoided taking any action.

In particular, 76.3 percent of the respondents blamed public figures' use of discriminatory expressions for their insensitiveness towards such comments. The tally jumped by 26.9 percent, from 49.4 percent two years ago.

On how to reduce hate speech, over 90 percent said politicians and news outlets should refrain from sharing news and expressions that could incite hate among people.

The respondents also approved of the introduction of various anti-discrimination policies, such as more education on hate speech prevention in schools and stronger legal action against malicious remarks. 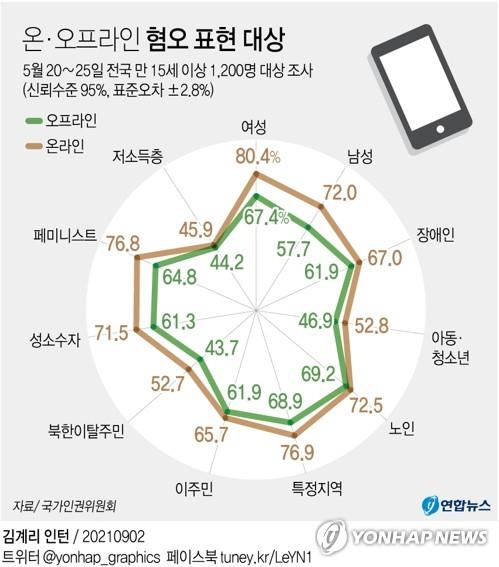