"Among several Billboard music awards, Asian music awards and many others, BTS have collected a jaw-dropping 23 Guinness World Records titles across music and social media -- an amazing result achieved also thanks to the enthusiasm of their fans, the ARMY," the publication said on its website Thursday.

"We are delighted to welcome BTS to our Guinness World Records Hall of Fame," it said. 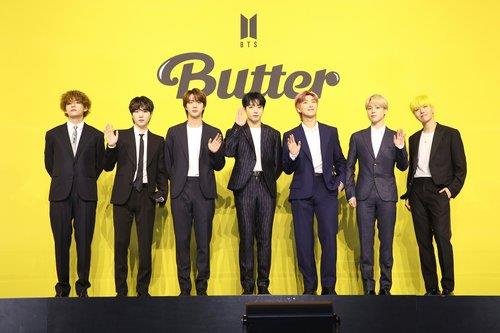 The Hall of Fame inducts the world's "most iconic" Guinness World Records title holders, according to the website.

The publication said BTS' records include "most streamed group on Spotify" and "most followed music group on Instagram," as well as "most Twitter engagements for a music group" and "most tickets sold for a livestreamed concert (756,000)."

The septet's mega-hit song "Butter" grabbed five records alone, from "most viewers for the premiere of a music video on YouTube" and "most streamed track on Spotify in the first 24 hours" to "most viewed YouTube music video in 24 hours."

The publication credited the group with inspiring new interest in Korean culture and promoting causes such as self-love, self-acceptance and mental health awareness.

"Their positivity and openness towards themes that are often considered taboo kindled even stronger support from their fans -- especially via Twitter," it said.

"As for their ability to have fun, amaze and communicate through music and dance moves, as well as their dedication for breaking records ... that is certainly what marks BTS as the perfect fit for our Hall of Fame 2022!"