SEOUL, Sept. 4 (Yonhap) -- One more Afghan, who was on South Korea's list of people to be evacuated from the war-torn Afghanistan, arrived here Saturday, the justice ministry said.

The Afghan, whose identity was withheld, landed at Incheon International Airport, west of Seoul, at around 8 a.m. The person flew in from India with help from Korean diplomats following a business trip there.

The person is an addition to hundreds of Afghans recently brought here by South Korea and labeled as "special contributors" for their contributions to its humanitarian and reconstruction activities in Afghanistan. 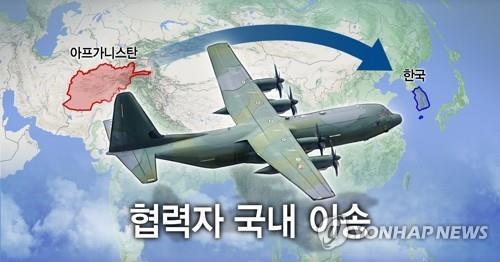 The contributor will go into a 14-day quarantine following a COVID-19 test. If given a negative test following the quarantine, the person will move to an accommodation facility in Jincheon, 91 kilometers south of Seoul.

South Korea had initially planned to evacuate 427 Afghans, but dozens of them chose not to come to Korea, either to stay with their relatives or move to a third country.

The Afghan evacuees include medical professionals, vocational trainers, IT experts and interpreters who worked for Korea's embassy in Kabul and its humanitarian and relief facilities in Afghanistan, as well as their family members.
(END)