SEOUL, Sept. 6 (Yonhap) -- The number of medical tourists to South Korea tumbled nearly 77 percent in 2020 from a year earlier amid the coronavirus pandemic, data showed Monday.

Roughly 117,100 foreign patients visited South Korea last year, down a whopping 76.5 percent from some 497,500 a year earlier, according to the data from the local medical community.

The data is based on statistics gathered by the Korea Health Industry Development Institute.

Seoul Asan Medical Center, one of South Korea's five major hospitals, was no exception. The general hospital in southeastern Seoul saw the number of foreign patients tumble 41 percent on-year to some 11,800 last year.

An industry source said the number of foreigners visiting South Korea for medical treatment nose-dived last year due to strict restrictions on cross-border movements and entry curbs amid the COVID-19 pandemic.

Watchers believe the situation unlikely to improve much this year amid the continued outbreak of the novel coronavirus.

In the first five months of this year, the number of foreign patients at Seoul Asan Medical Center totaled 5,348, slightly less than half the full-year tally for last year. 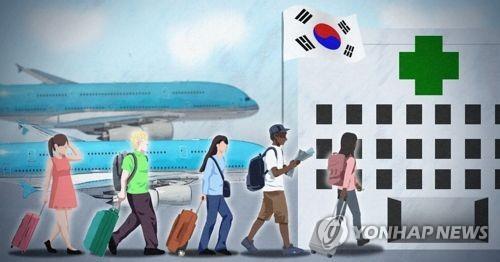