SEOUL, Sept. 6 (Yonhap) -- The defense ministry on Monday eased monthslong restrictions on service members' vacation and off-installation activities as the military has a high COVID-19 vaccination rate of about 94 percent, officials said.

Under the fresh regulations effective on Monday, up to 20 percent of service members can go on vacation at the same time per unit, and fully vaccinated troops are allowed to meet visitors who have also received vaccines, according to the ministry.

Previous regulations had banned soldiers from off-duty travel and meetings with visitors, while allowing only 10 percent of members of a unit to go on vacation at the same time to curb the pandemic.

Under the eased rules, officers are also allowed to travel off-installation and attend private gatherings while adhering to the government's social distancing rules, according to the ministry.

"We've decided to ease some of the rules given the completion of the vaccination campaign and the need to better ensure their basic rights," the defense ministry said in a release.

Around 94 percent of troops have been vaccinated under a campaign wrapped up last month.

Despite the easing of the rules on vacation, the Level 4 social distancing scheme will be maintained in the military for another four weeks until Oct. 3, which bans large-scale gatherings and events, according to officials.

Nationwide, South Korea reported 1,375 new cases on Monday. The daily caseload has hovered above 1,000 since early July amid the fourth wave of the pandemic, according to the Korea Disease Control and Prevention Agency (KDCA). 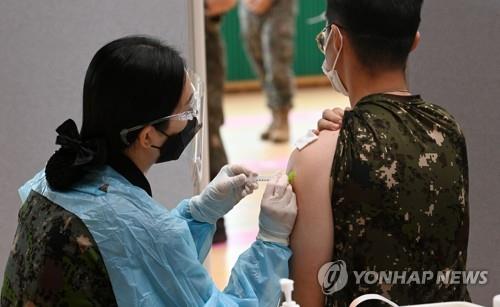