SEOUL, Sept. 6 (Yonhap) -- Gyeonggi Province Gov. Lee Jae-myung has secured a dominant lead in the ruling Democratic Party (DP)'s primary to pick its candidate for next year's presidential election, having won the first two rounds of votes by a landslide.

He won an accumulated 54.72 percent of the 38,463 votes cast by registered DP members in the two voting sessions, coming up far ahead of runner-up ex-DP chief Rep. Lee Nak-yon who had 28.19 percent.

The overwhelming victories in the Chungcheong provinces, a key swing region in national elections, provided a decisive impetus for Lee's campaign seeking a clean, early primary victory, based on his opinion poll dominance.

They also cleared away lingering doubts about the ruling party's acceptability of the governor, after many mainstream party members outspokenly threw support behind Lee Nak-yon.

His sweeping victories in the early phase of the primary also gave rise to projections that he may overwhelmingly claim the party's ticket to run in the March 9 presidential election in the ongoing six-way primary race, without having to call an additional run-off vote to pick the final winner. 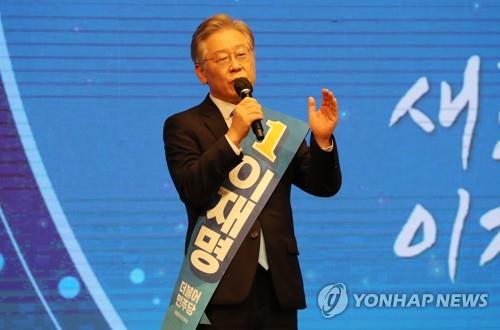 Many predict the primary's upcoming fourth leg in Gangwon Province, slated for Sunday, may serve as a precursor of the final primary outcome, as the result of one of the three rounds of separate votes among the party's general electoral college is due that day.

"The gap (between the Gyeonggi governor and Lee Nak-yon) may grow further in the votes among general electoral college voters. He may be able to clinch his dominance in the first super week on Sunday," a key official at the governor's presidential campaign told Yonhap News Agency.

Rep. Park Sung-joon, spokesman for his camp, also stressed that once the governor wins the party's final nomination, "it is essentially necessary for the party to stand united behind him for the sake of a presidential election victory."

Including the Gangwon leg, the DP is scheduled to hold nine additional primary votes across the country, wrapping up with the final destination in Seoul on Oct. 10.

The party is required to hold another run-off vote if none of the current six presidential contenders wins over half of the total ballots cast in the ongoing primary.

The Gyeonggi governor's early primary ascent, meanwhile, is weighing heavily on runner-up Lee Nak-yon's campaign, which had been pinning hope on his superior footing inside the party.

The former DP chief heralded a major change in his election strategy down the road, saying, following the election on Sunday, "I will have to reconsider policy (pledges) as well as campaign messages."

Many view that there still remains a chance for him to reverse the race in his favor even after ceding the Chungcheong provinces, which represent about 10 percent of the overall ballots to be cast.

"We expect a possible (reverse) effect in which (the recent voting outcome) heightened the sense of crisis among opponents of Lee Jae-myung to unite forces behind Lee Nak-yon," an official at the ex-DP chairman's camp said. 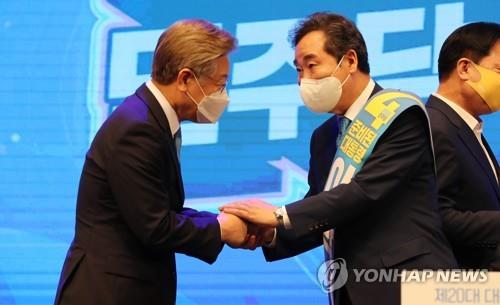