SEOUL, Sept. 7 (Yonhap) -- North Korea's military chief, Pak Jong-chon, has been elected a member of the Presidium of the ruling Workers' Party, state media reported Tuesday, in a comeback after he was demoted earlier this year for a lapse in anti-coronavirus efforts.

Pak was presumed to have been demoted from marshal to vice marshal after leader Kim Jong-un said at a party meeting in June that a "crucial case" had happened that could threaten the safety of his people and country in nationwide anti-epidemic efforts.

He appears to have replaced Ri Pyong-chol, who was also believed to have been dismissed as a presidium member for a failed response in anti-epidemic efforts.

The politburo presidium, consisting of five members, including leader Kim, is one of the North's most powerful party organizations that determines key policies.

The KCNA and the official Rodong Sinmun newspaper also reported that Rim Kwang-il, who served as head of the Reconnaissance General Bureau, the North's military intelligence agency, was elected as chief of the General Staff of the KPA. Jang Jong-nam, an army general, was elected as the Minister of Social Security. 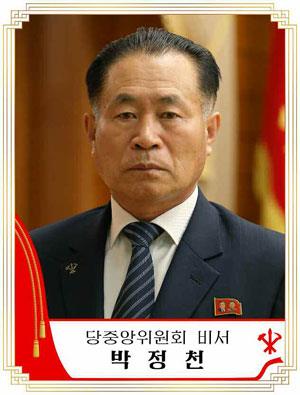