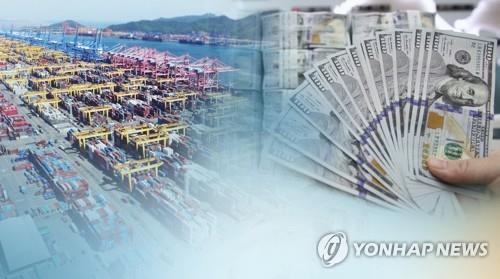 In the first seven months of this year, the accumulative current account surplus amounted to $52.55 billion, compared with $26.06 billion for the same period last year.

A BOK official said the annual surplus may reach around $80 billion as the trend is expected to continue into the second half on brisk exports.

The goods balance logged a surplus of $5.73 billion in July, smaller than the surplus of $7.01 billion the previous month.

The service account, which includes outlays by South Koreans on overseas trips, logged a deficit of $80 million in July, compared with a shortfall of $950 million in May.

The primary income account, which tracks wages of foreign workers and dividend payments overseas, logged a surplus of $2.8 billion in the month, bigger than a surplus of $1.69 billion in June.

Exports, which account for half of the South Korean economy, climbed 29.6 percent on-year in July on the back of brisk demand for chips and cars.

Outbound shipments came to $55.4 billion in July, extending their gains to the ninth consecutive month as the global economy maintained a recovery.