SEOUL, Sept. 8 (Yonhap) -- The Navy was to hold a launching ceremony Wednesday for a new 2,800-ton frigate with improved anti-submarine capabilities.

The new warship Pohang is the sixth of the country's FFX Batch II frigates to replace the Navy's 1,500-ton frigates and 1,000-ton patrol combat corvettes, according to the military.

The ceremony was to be held at its manufacturer Daewoo Shipbuilding & Marine Engineering Co.'s Okpo shipyard on the southern island of Geoje, with the attendance of Joint Chiefs of Staff Chairman Gen. Won In-choul.

With some 120 crew members aboard, the 122-meter frigate will carry various weapons, including ship-to-ship and ship-to-surface missiles as well as a helicopter for naval operations.

The new frigate also has improved capability to detect and attack submarines with a towed array sonar system and a long-range anti-submarine torpedo, according to the military.

"To protect our maritime sovereignty and national interest, we need a strong naval power among other things," Won said in a congratulatory message.

The new warship will be delivered to the Navy in early 2023 after a trial period. 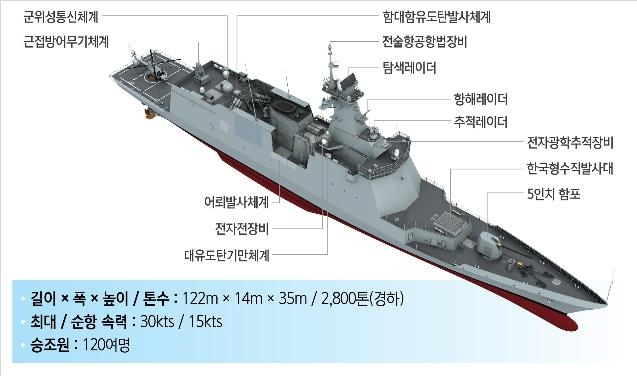