SEOUL, Sept. 8 (Yonhap) -- The floor leader of the ruling Democratic Party (DP) on Wednesday ratcheted up pressure on the front-running opposition presidential contender over a snowballing political meddling scandal allegedly involving him.

"People Power Party (PPP) candidate Yoon Seok-youl should apologize to the public and put himself up for investigation with sincerity," DP floor leader Rep. Yun Ho-jung said in his parliamentary speech marking the opening of a regular legislative session.

Suspicions have grown that Yoon, who served as prosecutor general from 2019 to March 2021, prodded the main opposition party to lodge criminal complaints against several pro-government figures ahead of the parliamentary elections in April last year, possibly to influence the polls.

Yoon resigned from office in March and joined the main opposition PPP as the front-running conservative presidential contender.

The DP floor leader accused Yoon of "going far beyond just meddling in politics as (a member of) the national prosecution service to engage in illegitimate politics from Seoul's Seocho-dong," he said, referring to the neighborhood where his former office as the top prosecutor is located.

"He used the prosecution's investigative power for private interest and carried out personal revenge. He meddled in national elections through collusion with an opposition party."

Yun also urged the PPP to expel from the party all those who are involved in the scandal, pledging further legislative efforts to reform the prosecution service.

On the economic front, the floor leader underlined the importance of financial support for those hit hard by the COVID-19 pandemic, especially small merchants, self-employed people and the culture and art sectors.

He also said the party will introduce a housing policy in which the state will guarantee a housing supply for people to meet their life cycles.

Yun also called on the two Koreas to hold an early meeting of their Red Cross bodies to facilitate regular reunions of families separated by the division of the Korean Peninsula. 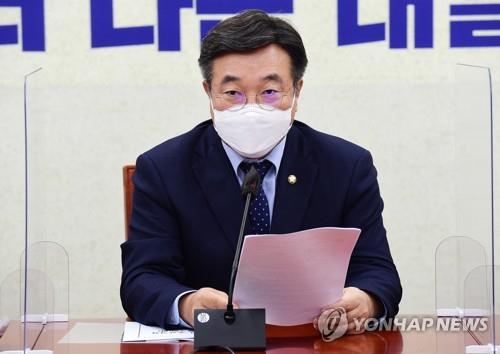