SEOUL, Sept. 8 (Yonhap) -- South Korea's central bank is expected to raise its interest rate in November to cope with concerns over a financial imbalance, a report said Wednesday.

"The Bank of Korea is likely to raise its benchmark rate to 1 percent from 0.75 percent at its Nov. 25 policy meeting in consideration of worries about a financial imbalance related to an economic recovery, rising inflation and the hot housing market," Woori Finance Research Institute said in the report on the local financial market.

Yet there is the constant possibility that the BOK may delay another rate hike until the first quarter of next year should the native impact of the coronavirus resurgence on the real economy grow larger.

At a rate-setting meeting slated for Oct. 12, the central bank is forecast to hold the base rate at 0.75 percent in line with its plans to adjust monetary policy in a gradual manner.

The BOK will likely keep close tabs on the effect of its rate hike in August, the recent trend in household lending and the U.S. Fed's policy tack, the think tank added. 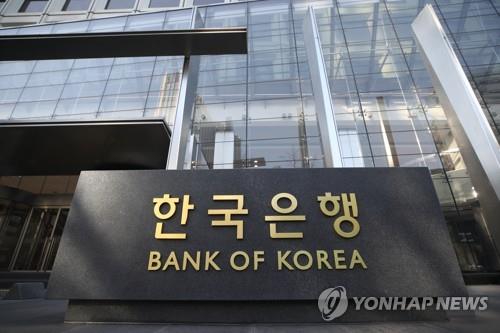 Announcing a statement after its August policy meeting, the BOK said it will gradually adjust its monetary policy down the road.

The institute predicted yields on state bonds at home and abroad to edge up in September and October amid a possibility of the Fed's earlier-than-expected tapering due to the spread of new coronavirus variants.

The South Korean currency is likely to face upward pressure against the greenback due to expectations of another BOK rate hike, its strong exports and an expansion in its current account surplus.

The local currency will thus rise to 1,155 won to the dollar in late September from 1,160 won a month earlier before gaining further to 1,150 won at the end of October, the think tank added.
(END)