SEOUL, Sept. 8 (Yonhap) -- Thousands of self-employed people in South Korea are set to hold drive-through protests in several cities across the country Wednesday night to call for eased COVID-19 restrictions and more compensation, the organizer said.

Around 2,000 to 3,000 people are expected to stage the rallies in nine regions, including Seoul, Ulsan, and provinces of North Jeolla, South Gyeongsang and Gangwon, from 11 p.m. to 1 a.m., according to an emergency committee of the self-employed.

"We do not intend to stage a violent protest but to say we want to do business and make a living," Lee Chang-ho, the group's co-leader, said.

The participants have agreed to strictly comply with social distancing rules during the rallies, staying in their cars or leaving windows closed, Lee added.

It will be the third time for the committee to stage car protests to demand the government relax COVID-19 restrictions and provide more compensation for financial losses stemming from the social distancing scheme that restricts operations of cafes, restaurants, gyms and karaoke rooms.

Hundreds of vehicles participated in protest parades in Seoul in July and in the southeastern city of Busan and neighboring South Gyeongsang Province in August. 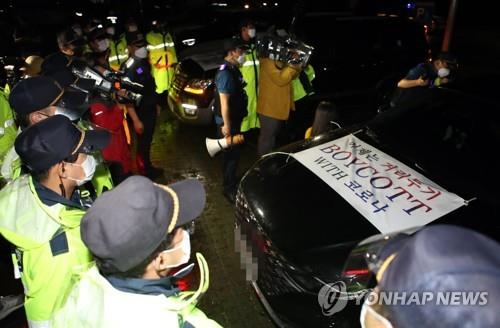 Police in Seoul are on alert as protesters from nearby Gyeonggi Province and Incheon plan to gather in the capital.

Seoul police said they will dispatch 21 units of police officers to prevent rally participants from gathering and sternly respond to illegal acts.

"Organizers and participants of (illegal rallies) can be charged with violation of the Infectious Disease Control and Prevention Act and the Assembly and Demonstration Act," the police said.