SEOUL, Sept. 8 (Yonhap) -- Rep. Lee Nak-yon, a presidential contender of the ruling Democratic Party, said Wednesday he will vacate his parliamentary seat to commit entirely to his presidential bid.

"In order to safeguard the values of the Democratic Party (DP) and democracy, I decided to give up my legislatorship to march toward winning the presidency," Lee said during a press conference in the southern city of Gwangju, a region traditionally supportive of the liberal party.

"I will commit everything I have to secure the second consecutive presidency (for the DP) so that I can repay the party and the country," he said.

The decision comes as Lee, a former DP chairman, tries to rally support for his presidential campaign ahead of an all-important primary event on the weekend to pick the party's candidate for the March 9 presidential election.

On Sunday, the party is scheduled to release one of the three rounds of votes among the party's general electoral college, which is likely to be a major precursor to the final primary outcome.

In the first two of the total 11 regional primary elections so far, Lee was lagging far behind the front-runner, Gyeonggi Gov. Lee Jae-myung, 28.19 percent to 54.72 percent, despite his solid footing inside the ruling party, previously seen as stronger than that of the rival.

"The party needs to come up with a candidate who suits the values of the DP and democracy," he stressed. 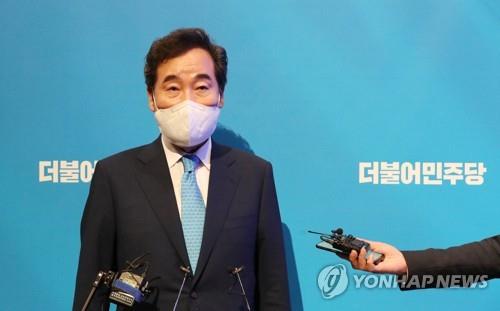