SEOUL, Sept. 8 (Yonhap) -- Yoon Seok-youl, the front-running opposition presidential contender, on Wednesday once again denied allegations that he tried to meddle in politics while he was the chief prosecutor, branding the claims a "political maneuver" intended to overturn his lead in the race.

The suspicion implies that Yoon, who served as prosecutor general from 2019 to March 2021, prodded the main opposition party to lodge criminal complaints against several pro-government figures ahead of the parliamentary elections in April last year, possibly to influence the polls.

Yoon has denied the suspicion since it was first raised by local news outlet Newsverse last week.

The allegations are based on "dubious documents whose source and author are nonexistent," Yoon said during a hastily called press conference at the National Assembly.

"It is such a pity that political maneuver and propaganda such as this should be mobilized every election season," he said.

The reaction came as the snowballing scandal is roiling Yoon's presidential campaign as his party, the main opposition People Power Party (PPP), is set to kick off a primary race to pick its flag-bearer for the March 9 presidential election.

News reports said a key prosecution official close to Yoon provided the main opposition party with two letters of official complaints to be filed against three pro-government figures and several other journalists just ahead of the April 15 general elections.

Taking issue with the letters in question, Yoon said "anything such as paper or digital documents should be taken as a basis for raising allegations only after their source or author is confirmed."

Yoon added he is willing to join a parliamentary session anytime to subject himself to scrutiny on the issue. 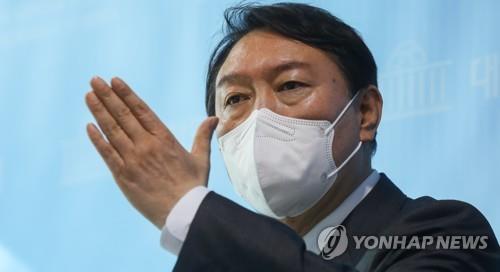