SEOUL, Sept. 9 (Yonhap) -- North Korea held a midnight military parade to mark the 73rd anniversary of national founding with leader Kim Jong-un in attendance, but he did not deliver an address and no new strategic weapons were displayed, according to state media and South Korean officials.

"The military parade of civilian and security armed forces was held at Kim Il-sung square in Pyongyang to mark the 73rd anniversary of the republic's founding," the KCNA said. "As the welcoming music was performed at midnight on Thursday, Comrade Kim Jong-un walked up to a podium."

The parade was mostly led by the Worker-Peasant Red Guards (WPRG), according to the KCNA. WPRG is a civilian defense organization in North Korea composed of around 5.7 million workers and farmers, about one-quarter of the country's population. 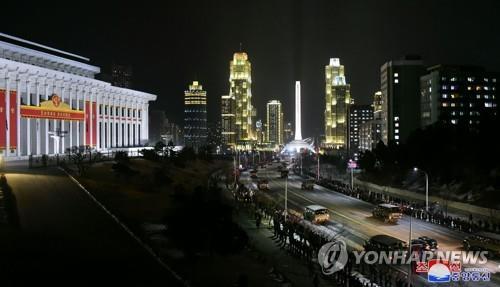 Instead of leader Kim, Ri Il-hwan, a party secretary, addressed the parade.

"The government of the republic will firmly defend the dignity and the fundamental interests of our people and solve everything our own way with our own efforts on the principle of self-reliance and self-development under any circumstances," Ri was quoted as saying by the KCNA.

"We will increase the People's Army, a pillar in defending the state, in every way, put the defense industry on a higher juche and modernized basis and keep spurring the struggle for carrying out the Party's policy on putting all the people under arms and turning the whole country into a fortress to ceaselessly improve the defense capability of the country," he added.

The parade was watched closely by South Korea and others because the North could show off state-of-the-art weapons systems, such as a new intercontinental ballistic missile capable of hitting the mainland United States.

A South Korean source earlier said the parade appeared to have been conducted in a smaller scale than the previous ones held in January this year and in October last year.

"It seems to have lasted for about an hour and involved a smaller number of troops and equipment. I think the parade was mainly for domestic audiences," he added.

The move came amid stalled denuclearization talks between the U.S. and North Korea. Washington has said it is ready to hold talks with the North anywhere, at anytime, but the communist country has remained unresponsive to U.S. overtures. 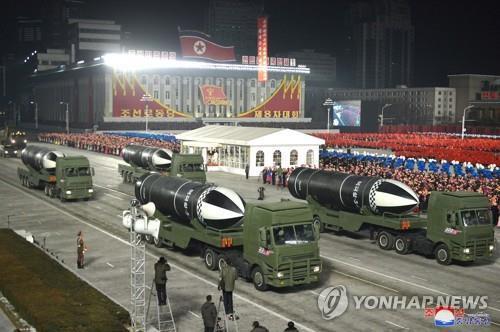