The value of bonds sold in Asia's fourth-largest economy stood at 67.5 trillion won (US$57.7 billion) last month, down 1 trillion won from a month earlier, according to the data from the Korea Financial Investment Association.

Sales of corporate bonds shrank by 4.7 trillion won in August from the prior month, and those of environment, social and governance (ESG) bonds fell by 96 billion won.

In contrast, sales of state bonds increased by 1.7 trillion won on-month, with those of financial bonds rising by 2.1 trillion won.

Foreign investors bought a net 8 trillion won worth of South Korean bonds in August, with their holdings of local bonds hitting an all-time high of 197.5 trillion won.

As of end-August, the value of outstanding bonds in the country stood at 2,436 trillion won, up 17.5 trillion won from the prior month. 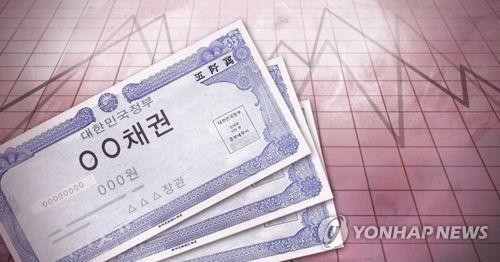 Bond issuance in S. Korea inches down in Aug.

Bond issuance in S. Korea inches down in Aug.