SEOUL, Sept. 9 (Yonhap) -- The ruling Democratic Party (DP) is gearing up to enact a new law targeting "unjust" business practices by domestic online platform giants that have rapidly grown to control a lion's share of the market.

Last month, the party controlling an absolute majority at the National Assembly led a parliamentary approval of a law banning Google and Apple from forcing app developers to use the platforms' payment systems. The approval made South Korea the first country to introduce such curbs on global tech giants' in-app billing policies, which have come under increasing scrutiny around the world.

About 10 different versions of the envisioned bill have been submitted for parliamentary review since last year amid growing concerns over the increasing predominance of mainstream online platforms.

Behind the legislative efforts are a consensus within the party that the companies' unfair business practices, based on their dominant market presence, such as high commission rates imposed on those running business on their platforms, have gone unchecked for years.

The two online giants, controlling mainstream internet portals, Naver and Daum, respectively, have aggressively expanded into online commerce ranging from online shopping and transportation to entertainment, posing a threat to the survival of small merchants.

In a recent seminar targeting Kakao's aggressive business expansion, DP Chairman Rep Song Young-gil hinted at the party's imminent action against the platform giants, saying "a market dominance issue has been on the other side of Kakao's breakout success."

According to party officials, the DP plans to conduct an internal survey of the online platform market to formally raise the need for regulation during a parliamentary audit of the government, slated for next month.

Rep. Jin Sung-joon, a DP member whose committee recently hosted a public hearing on the issue, said the focus of the party's upcoming legislation will be on "guaranteeing the power of businesses running on platforms to counter" any abusive practices by online platform giants. "(We) need a measure that will empower those businesses to form a group to have bargaining power against platform operators," the lawmaker noted. 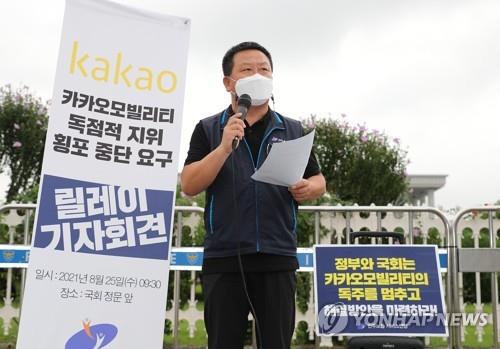