The typhoon was located 170 kilometers southeast of Taipei as of 9 a.m., heading northeastward at a speed of 21 kilometers per hour, according to the Korea Meteorological Administration (KMA). Its maximum wind speed was clocked at 50 meters per second.

The KMA said the storm is expected to reach waters off the southern resort island of Jeju and the southern coast of South Korea around Wednesday and Thursday, after spending a few days near Shanghai, China.

The agency warned of heavy precipitation for the southern areas where the cold dry air above the country will meet the high-temperature water vapor brought by the typhoon.

Jeju may come under the influence of the typhoon around Wednesday, with the island forecast to receive as much as 300 mm of rain, according to KMA.

The weather agency said the exact route of Chanthu may change depending on how it passes through China in the coming few days and it will provide detailed weather forecast on Tuesday. 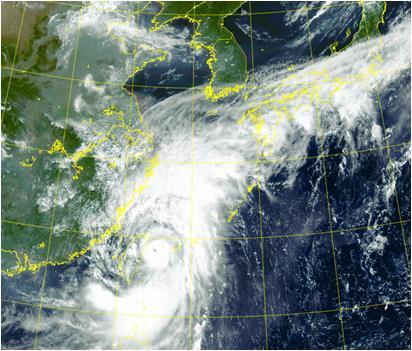