SEOUL, Sept. 13 (Yonhap) -- State prosecutors on Monday requested that the judiciary sentence a murder suspect to death for killing three women of the same family in March.

The suspect, Kim Tae-hyun, 24, was indicted on five counts of criminal charges, including murder, housebreaking and harassment in April.

He was arrested at the victims' home in northeastern Seoul on March 25, where he allegedly killed a woman whom he had stalked, her mother and younger sister two days earlier.

In the closing arguments at the Seoul Northern District Court on Monday, the prosecutors said, "There is no room for consideration of punishment other than death sentence for the accused," as he "premeditated his crimes," and showed "extreme disregard for human life" and "no serious remorse" over his "ruthless murders."

The suspect said his "heart ached for the victims" and apologized to them.

Kim disguised himself as a deliveryman to enter their home and killed the youngest woman who was there at that time. After killing her, he waited for the other two to come home and stabbed them to death when they arrived, police said.

He claimed that he got to know the woman through an online game last year, and that he committed the killings out of a grudge as she would not meet him and stopped communicating with him. 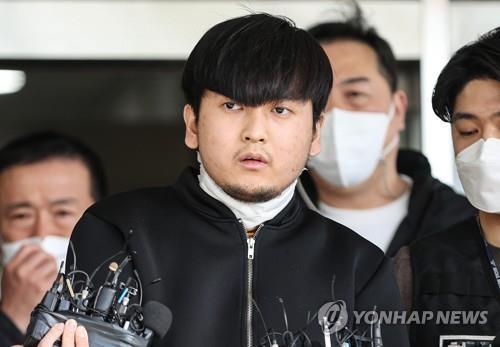