Wang landed at Incheon International Airport, west of Seoul, on a private plane at night for a two-day trip, just days after the North test-fired a new type of long-range cruise missile over the weekend while also showing signs of reactivating a plutonium-producing nuclear reactor.

He is scheduled to hold talks with Chung on Wednesday where they are expected to discuss the North's missile launches and efforts to bring Pyongyang back to dialogue amid the prolonged deadlock in the denuclearization talks with the United States.

In the morning the same day, President Moon Jae-in will have a meeting with the top Chinese diplomat at Cheong Wa Dae, the presidential office said.

Moon is likely to call for China's backing for Seoul's efforts to build peace with the North, during the meeting.

South Korea has sought to maintain close ties with Beijing despite an intensifying rivalry between China and the United States, as the country tries to enlist support from Beijing to move the stalled nuclear talks forward.

Wang could also use the occasion to highlight Beijing's positions on key regional issues, such as the Taiwan Strait, the East and South China seas, and Xinjiang province, among the issues over which his country has been at odds with Washington.

On bilateral relations, the two sides are expected to have broad discussions on ways to strengthen cooperation on a wide range of areas, with a particular focus on promoting cultural exchanges, such as in the humanities sector, as next year will mark the 30th anniversary of the establishment of diplomatic relations.

They recently launched a committee on the future development of bilateral relations.

Wang's visit comes about five months after Chung and Wang had their last talks in the Chinese city of Xiamen in April. Wang last visited Seoul in November last year. 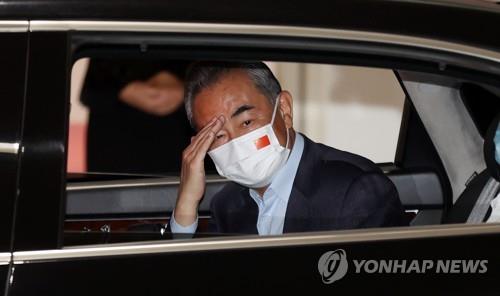