SEOUL, Sept. 14 (Yonhap) -- President Moon Jae-in met with the members of BTS, a popular South Korean boy band, at his office Tuesday and awarded them the certificates of appointment as his special envoy for public diplomacy.

BTS will begin activities in earnest as the "special presidential envoy for future generations and culture" by attending an annual United Nations General Assembly session in New York next week, according to Cheong Wa Dae.

Moon is also scheduled to attend the 76th session of the U.N. General Assembly. The president and the seven members of BTS plan to participate together in the second meeting of the Sustainable Development Goals Moment (SDG Moment) of the Decade of Action to be held on Monday. BTS will make a speech during the session, with a video clip of its performance played. 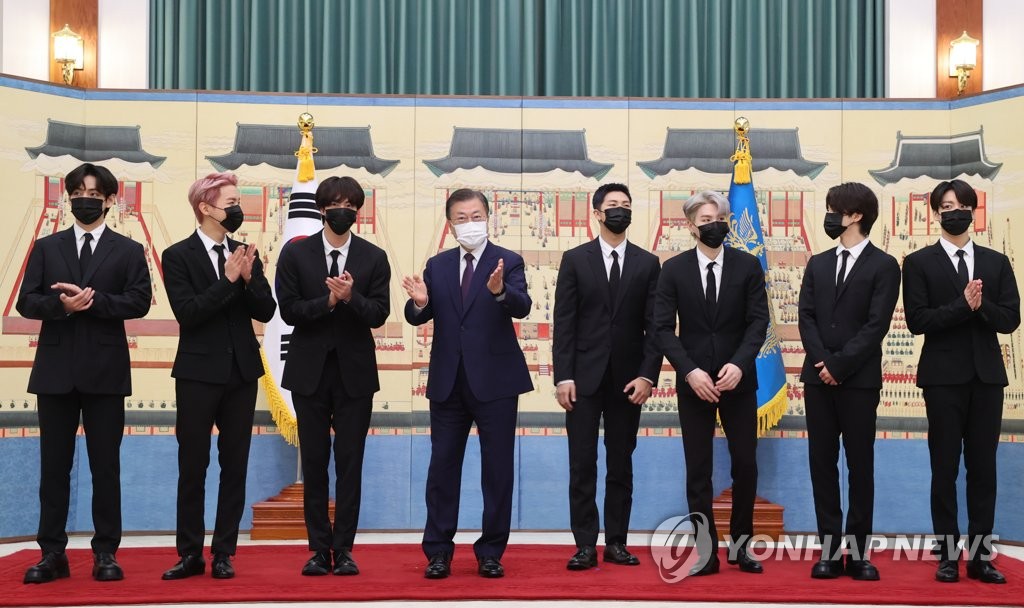 The SDG Moment is aimed at reinforcing the international community's efforts to achieve the SDGs, a blueprint for resolving pending global challenges, including poverty, hunger and the climate crisis.

"As BTS has delivered messages of comfort and hope to the entire world, its attendance at the U.N. General Assembly this time is expected to serve as a meaningful opportunity to expand communication with future generations around the world and draw their sympathy on major international issues," Cheong Wa Dae said in a statement.

Moon meets BTS, tapped as his special envoy, ahead of U.N. event next week

Moon meets BTS, tapped as his special envoy, ahead of U.N. event next week