SEOUL, Sept. 14 (Yonhap) -- South Korea's credit card firms saw their combined earnings rise 33.7 percent on-year in the first half of the year due largely to an increase in commission income, the financial watchdog said Tuesday.

The combined net profit of eight card issuers, including Shinhan Card Co. and Samsung Card Co., came to 1.49 trillion won (US$1.3 billion) in the January-June period, up 376.3 billion won from a year earlier, according to the Financial Supervisory Service (FSS).

The FSS attributed the increase to rises in commission income and earnings from card loans.

Amid an economic recovery, their commission income rose 257.8 billion won on-year, while profits from card loans increased 132 billion won from the previous year.

The overall credit card delinquency ratio came to 1.13 percent as of the end of June, down 0.25 percentage point from a year ago, the FSS said.

The value of card spending came to 462.6 trillion won in the first half, up 8.9 percent from the previous year, according to the FSS.

Card spending grew a yearly average of 7 percent before the outbreak of the new coronavirus. But credit card usage grew 1.1 percent last year as private spending suffered slumps due to the COVID-19 pandemic.

The number of credit cards issued came to 115 million as of end-June, up 2.6 percent from the previous year. The issuance of debit cards fell 3.6 percent to 108 million. 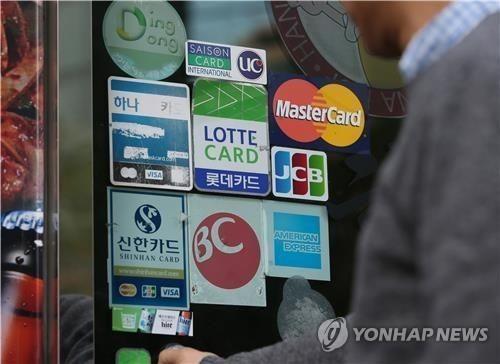