SEOUL, Sept. 14 (Yonhap) -- A TV adaptation of "Yumi's Cells," one of the most-viewed webtoons in South Korea, will hit small screens this week, personifying the inner feelings and drives through animated characters, dubbed "cells."

The namesake comic, written by Lee Dong-gun on Naver Webtoon from 2015-2020, gained huge popularity for featuring the daily life of an office worker in her early 30s from the point of view of inner minds, "cells." It posted a cumulative 3.2 billion views. 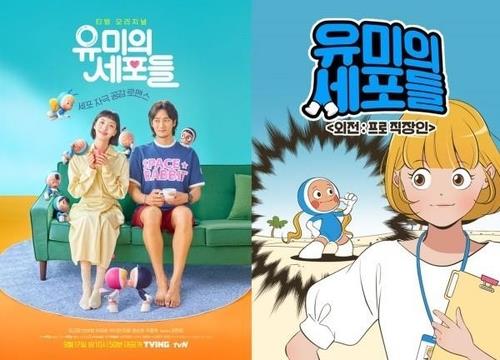 The new tvN drama, starring Kim Go-eun of the mega-hit fantasy "Guardian: The Lonely and Great God" (2016) and Ahn Bo-hyun of the drama "Itaewon Class" (2020), is one of the most anticipated TV shows of the latter half of 2021 for its star-studded cast and the first combination of live action and animation in a South Korean TV series.

"Before we speak, a number of thoughts and feelings spring up in our head, and those 'cells' represent our inner process," said the actress who takes the lead role of Kim Yumi in the upcoming romance, in a press conference streamed online Tuesday. "That setting caught my mind and thrilled me to some extent."

She said she loves the scene in the show when the 'hungry cell' comes out and wields its influence every night inside Yumi's brain.

"That's what I experience every day," she said, laughing. "I always hope to calm down the 'hungry cell' and want to ask other cells to fight against it."

But it was not easy for the prolific actress, who has been in fantasies like "Guardian" and the crime action film "Coin Locker Girl" (2015), to interact with those animated cartoon characters during filming.

"I was worried about whether my acting would go well with animated characters, which I couldn't see at the time," she said. "But it was a very interesting experience to take on the challenge."

Her partner Ahn, who plays Ku Woong, a computer developer who falls in love with Yumi, has already become the talk of the town for synchronizing himself with the cartoon character.

"I've made efforts to look exactly like Woong, a swarthy young man with long hair and a beard," he said. "I know there are a lot of people who love the original webtoon. I thought my resemblance will help them enjoy the TV series more easily."

Director Lee Sang-yeob, who has made hit TV series, including the romantic comedy "Shopaholic Louis" (2016) and the romance "A Familiar Wife" (2018), said he adored the original cartoon so much he put top priority on dramatizing its characters and episodes.

"I've tried to create scenes that resemble the original, as people can check the cartoon on a real-time basis as a reference," he said. "I had asked actors to imitate facial expressions of their cartoon characters before filming. And they did perfectly."

"Yumi's Cells" will premiere on cable channel tvN and its video streaming platform Tving on Friday. 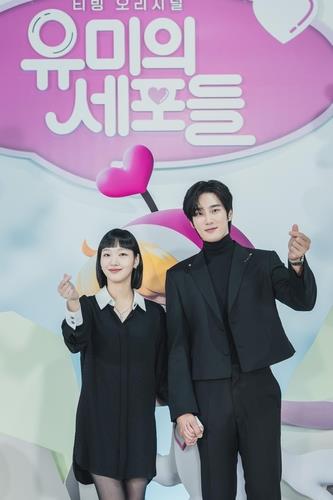