Suh made the remarks in response to lawmakers' questions during the National Assembly's interpellation session, where he was intensively asked if the military had detected the North's latest missile launches. 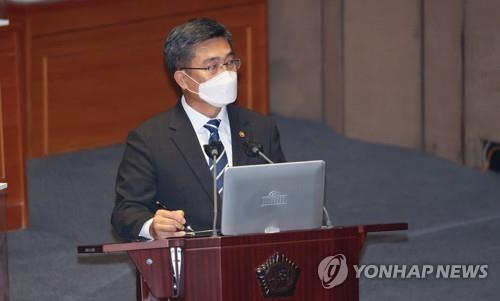 Pyongyang's media announced the North successfully test-fired long-range cruise missiles over the weekend and they hit a target 1,500 kilometers away after flying 7,580 seconds, or 126 minutes. Following the announcement, however, some critics pointed out the South Korean military may have failed to detect the missile launches.

Suh said "yes" when asked if the detection by the joint assets was accurate.

"We did detect the missiles through the South Korea-U.S. combined assets and are now conducting an initial analysis," Suh said, refusing to elaborate on when and how they detected the firings.

When asked whether he could not give a specific answer because the detection was part of the allies' special intelligence, the minister said, "It is difficult to tell in detail, but we are analyzing detailed specifications through cooperation with the U.S."

He was also asked about the need to reinforce the nation's air defense system and said, "We have a detection and interception system against the North's cruise missiles. We will continue to review and complement the defense system down the road."