"The denuclearization of the Korean Peninsula was a promise made by Chairman Kim himself in front of his people. Even if the North is a one-person (ruling) system, he must feel a considerable burden," Chung said in an interpellation session. 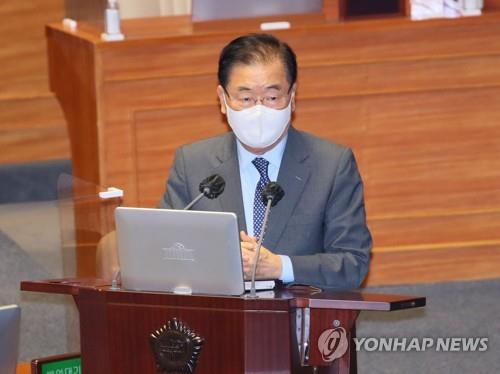 The minister made the remarks when Tae Young-ho, a North Korean defector-turned-lawmaker affiliated with the main opposition People Power Party, asked him if the North's leader is committed to denuclearization and whether President Moon Jae-in believes Kim is willing to denuclearize.

Tae cited Kim's declaration of sustained nuclear weapons development over the past four years at a party congress early this year and asked Chung again about the North Korean leader's intent to denuclearize.

The foreign minister responded briefly, "It was seen as a domestic message."

Regarding the news that former U.S. Secretary of State Mike Pompeo had a negative view of the North's denuclearization, Chung said flatly that he does not think all of Pompeo's judgments are correct.

The minister expressed regrets at Pyongyang's recent long-range cruise missile launches but said they are not in violation of the U.N. Security Council resolutions.

"We're working closely with the U.S. government and it is believed that our air defense system remains solid," the minister said.

With regard to a media report that Moon may travel to Beijing next year to attend the 2022 Winter Olympics, Chung said the government has never considered such a trip by the president.