SEOUL, Sept. 15 (Yonhap) -- Foreign Minister Chung Eui-yong and his Chinese counterpart, Wang Yi, were set to hold talks in Seoul on Wednesday, with their agenda likely to include North Korea, bilateral ties and cooperation ahead of next year's Beijing Winter Olympics.

The talks come as the United States' exit from Afghanistan is expected to free up resources to renew the focus on its rivalry with China and rev up a campaign to firm up its regional alliances to counter the Asian power's growing assertiveness.

The meeting also follows renewed military tensions caused by the North's weekend test-firings of a new type of long-range cruise missile and signs of the country resuming the operation of a plutonium-producing nuclear reactor at its mainstay Yongbyon complex.

Wang arrived in Seoul on Tuesday for a two-day visit. He has been on an Asian swing that has taken him to Vietnam, Cambodia and Singapore.

During Wednesday's talks, Chung and Wang are expected to exchange views on the North's recent provocative moves and discuss efforts to advance the South's drive for lasting peace on the Korean Peninsula.

The two sides could also discuss cooperation in bolstering bilateral cultural exchanges that have been impeded by China's perceived restrictions following Seoul's 2016 decision to host a U.S. anti-missile system.

Wang could use the meeting to seek South Korea's support on a range of sensitive geopolitical issues, as the U.S. seeks to rally its allies behind its opposition to China's policies on Hong Kong, the western Xinjiang region, and the East and South China seas.

The ministers are likely to touch on cooperation in Beijing's efforts to successfully host the Winter Games slated for February.

Later in the day, Wang plans to pay a courtesy call on President Moon Jae-in. 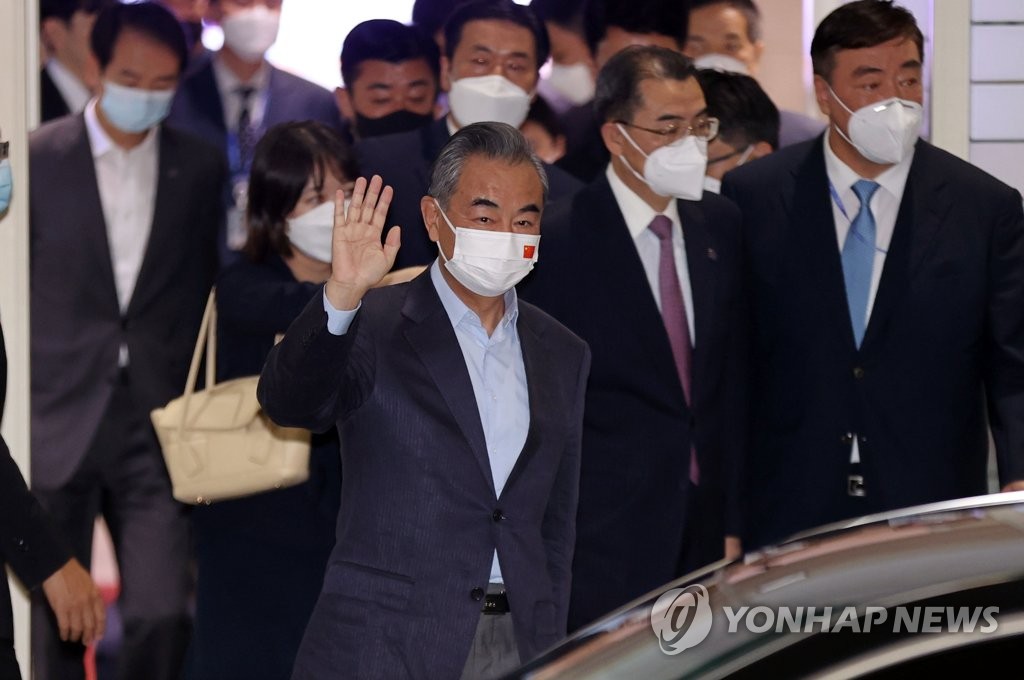