SEOUL, Sept. 15 (Yonhap) -- The leaders of the ruling and main opposition parties will visit the United States next week to discuss Korean Peninsula issues and drum up absentee voters' turnout for next year's presidential election.

Rep. Song Young-gil, chairman of the ruling Democratic Party (DP), will leave for Washington on Sunday for a six-day visit, which includes meetings with U.S. National Security Adviser Jake Sullivan, Kurt Campbell, policy coordinator for the Indo-Pacific at the White House, and congresspeople.

Lee Jun-seok, chairman of the main opposition People Power Party, will also go on a six-day trip to the U.S. next Wednesday. The visit is primarily aimed at encouraging overseas Koreans' participation in the absentee vote for the presidential election, the registration for which is set to begin on Oct. 10.

Lee will first visit Washington and move to New York and then Los Angeles for the campaigns. Party sources said Lee's side was also trying to arrange meetings with U.S. congresspeople.

The upcoming trips mark the first U.S. visit as political party leaders for both Song and Lee after they were elected in May and June, respectively. 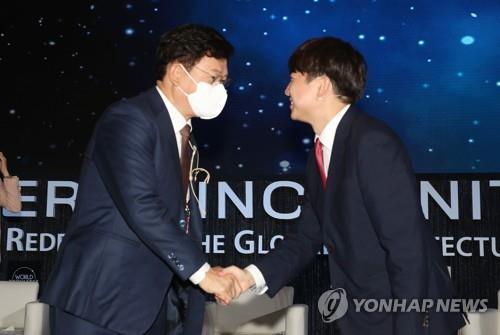 Leaders of rival parties to visit U.S. next week

Leaders of rival parties to visit U.S. next week