SEOUL, Sept. 15 (Yonhap) -- A majority of South Korean exporting companies expect international freight rates to continue their uptrend till the first half of 2022, a poll showed Wednesday.

The survey of 1,000 exporters, taken by the Federation of Korean Industries, showed 7 out of 10 firms forecasting freight rates to keep rising at least until June next year.

Some 70 percent of the polled corporations replied that international freight rates will normalize after June next year, with only 7 percent projecting them to return to normal this year.

The poll also showed nearly 26 percent of the companies suffered from a surge in freight rates.

About 25 percent of them are troubled by a delay in transportion, with roughly 19 percent having difficulty in securing freight ships.

Nearly 39 percent of those exporting companies said rising logistics costs have resulted in a decline in their operating profit, with about 36 percent suffering from rising costs related to delayed transportation, according to the findings. 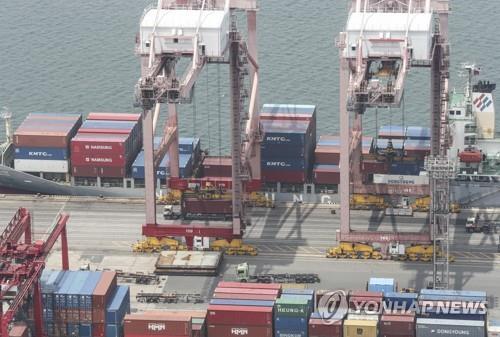