The concert, titled "BTS Permission To Dance On Stage," will be livestreamed on Oct. 24, according to an announcement by Big Hit Music on its fan community Weverse.

It said detailed schedules on ticket sales will be announced later.

"We hope all of our fans across the world can enjoy with us on the day," rapper J-Hope said in a video clip posted on its official Twitter account. "Where you are is our stage." 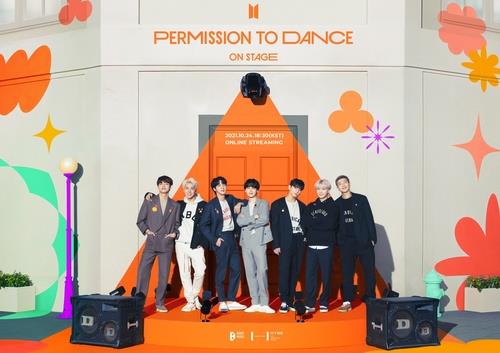 The upcoming online event came as the seven-piece act officially scrapped its planned world tour, "BTS Map of the Soul Tour," last month. The global concert tour was set to go through 18 countries, including the United States, Japan and Germany, starting in April last year, but it has been put off for more than a year due to the COVID-19 pandemic.

It is also BTS' first global online concert in about a year since its previous "BTS Map of the Soul ON:E" held in October last year, which attracted 990,000 viewers across the world.