SEOUL, Sept. 15 (Yonhap) -- South Korea and China opened the 2021-22 year of cultural exchange with a ceremony in Seoul Wednesday, hoping for the event to be a chance to enhance bilateral cultural exchange and cooperation.

The opening came eight months after President Moon Jae-in and his Chinese counterpart, Xi Jinping, declared the 2021-22 year of cultural exchange during their phone talks in January. The two countries are to commemorate the 30th anniversary of their diplomatic ties in August next year. 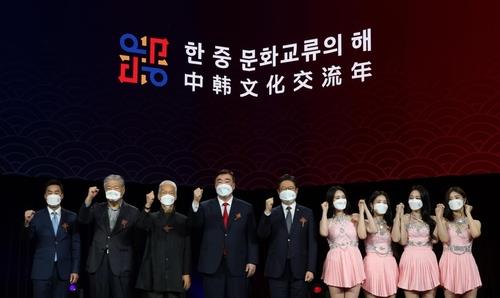 "South Korea and China should continue to cooperate and communicate through their culture, which has become a high-value industry," South Korean Minister of Culture, Sports and Tourism Hwang Hee said in his welcome speech during the ceremony. "That's because culture is the foundation of bilateral ties and a major driving force for recovery and growth."

Hwang then proposed to begin cultural companionship to open a new chapter of cooperation ahead of next year's 30th anniversary.

China's culture minister Hu Heping said in his congratulatory video message for the ceremony, "The year of South Korea-China cultural exchange, an agenda shared by their leaders, reflects the two peoples' hope to expand ties and promote understanding between their countries."

Hu also accepted Hwang's proposal, noting they should work together to strengthen cooperation in the culture and tourism sectors, and facilitate exchanges between people as well.

K-pop group Brave Girls, one of the honorary ambassadors for the South Korea-China cultural exchange, performed their songs during the ceremony.

There also was a joint writing performance by Park Dae-sung and Han Meilin, both art masters and honorary ambassadors of traditional culture from Korea and China, and a lantern lighting show.

The ceremony was broadcast on four TV channels based in Seoul and Beijing, including Korea's Arirang TV and China's iQYI TV. It is also available on the YouTube channel of the Korean Foundation for International Cultural Exchange.